August 05, 2018
I encountered what is known as Routed SQL Injection a couple of times but it was never required to exploit the vulnerability to the full extent. Recently, I discovered an online challenge on the topic and decided to look at it in depth. An explanation of the vulnerability with a vulnerability code which is described in the beginning this post, can be found here.

To better understand the vulnerability, lets examine the following piece of code:

Let's exploit that in the online challenge (the source code is different but similar in nature). To begin with, starting by confirming that it indeed is vulnerable to SQL Injection by sending a single string ' as payload:

Next, we'll send as payload ' union select 1 -- -  the injection will escape the first SQL query and set both the values, the second one (representing sec_code in our example) to the value 1 - therefore, since it actually has a value, the second query will run successfully and return output for the value 1:

If we set the second query to a true statement, it will evaluate every record in the database and return output from the final one it finds. The query would be (in theory) ' union select ' or true -- - -- -. However, we get an alert "Attack detected" - there are filters in place!

To bypass the filter, we'll HEX encode the value (which also helps with the injection itself  because it encodes the comments characters and are therefore only evaluated in the second query once decoded) that we pass to the second query (in the previous query it is the ' or true -- - part) as shown on the payload below:

It appears that the final item it found had an ID 3 (or there are 3 items). But what is important is that we found a bypass for the filter and we can control the second part of the query. Next we utilizing "ORDER BY" sql clause to determine that the SQL table contains 2 columns because when we try to order by the third, we get an error, that it is unknown - as shown below:

This error is very good news because the results we got previously have "ID" and "Email" as output fields. If both values are returned from the second query that we injected into, then we may be able to return any output that we desire in both fields by utilizing union select once again, this time in the second query as well OR run any SQL Query instead of setting the output to a fixed value. For example, let's try to set the output fields to 1 and 2:

As we can observe from the output, we can successfully control the values of the output from the second query - just as we have been doing from the very begging with the first one! With this kind of control, we can replace the fixed values 1 and 2 with SQL functions e.g. get current user and version:

Basically, we are now in a situation that resembles a normal SQL Injection. After some queries to discover the existing tables, columns etc, we can finally execute a payload that will dump the information in the users table - note group_concat is used because the result has multiple rows:

Popular posts from this blog

Intro Securing windows environments in a way that prevents lateral movement and/or escalation of privileges has become an incredibly difficult task. The research and tools created in the past 2-3 years have been simply amazing, which helped to identify new attacks and vulnerabilities, while lowering the sophistication required to exploit them. The easiest way to ensure that your environment is built in a secure manner, is to rebuild it from scratch with a security architect behind the design. As Microsoft states, one may never trust Active Directory, if it has been compromised, unless it is possible to return to a known good state. Unfortunately, creating a new environment is unrealistic, so in this post, I'll focus on identifying common and deadly "flaws" in the current implementation and provide techniques and procedures that I recommend, to increase your Cyber maturity and capabilities to withstand an intrusion or limit the impact of one, should it occur. The inform
Read more

The mind-blowing Kerberos "Use Any Authentication Protocol" Delegation 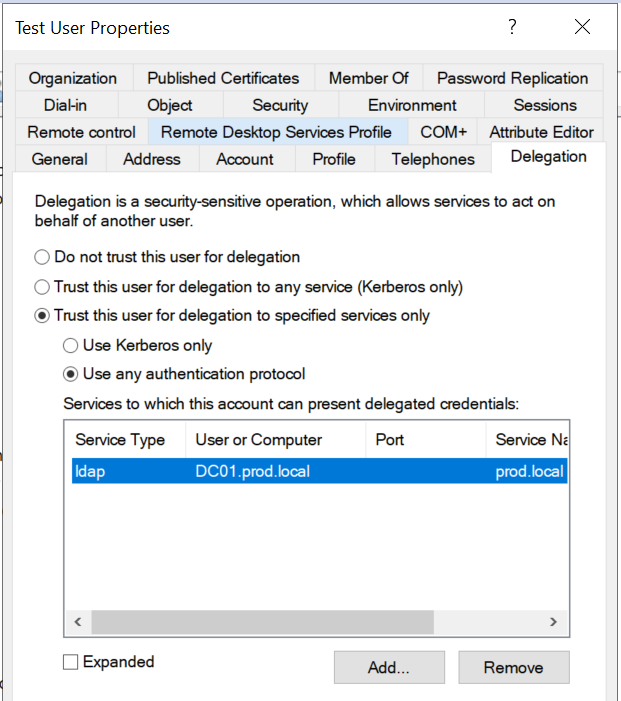 Kerberos delegation has been in the spot light for some time now and the risks behind it have been outlined in quite a few blogs and conference presentations - I particularly recommend reading  https://adsecurity.org/?p=1667  and  https://www.harmj0y.net/blog/redteaming/another-word-on-delegation/ . For some time, it was my incorrect  understanding that unconstrained delegation is a massive problem while constrained/resource based is less destructive. That is however not the case, and the exploitation that is to follow absolutely blew my mind the first time I saw it in "action". When a service account is set for "Use any authentication protocol" delegation, it means that the service account is allowed to delegate without being required to prove that a user authenticated to it! In normal words, just saying "I shall pass because I am the administrator, trust me!" opens the door with no questions asked and no one verifying that you are in fact the adminis
Read more